Chloracne is a rare skin eruption of blackheads, cysts and nodules, which has been linked directly to dioxin exposure. Mild forms may resemble teenage acne. Physicians sometimes have difficulty distinguishing chloracne from more common skin disorders.

Chloracne is a well established, long-term effect of exposure to TCDD or dioxin, a contaminant in Agent Orange. It is the only skin disorder consistently reported to be associated specifically with Agent Orange and other herbicides. However, not all persons exposed to dioxin develop chloracne. 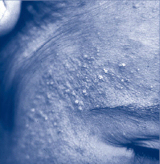 Symptoms include excessive oiliness of the skin and the appearance of numerous blackheads, often accompanied by fluid-filled cysts and dark body hair. In mild cases, blackheads may be limited to the area around the eyes, extending along the temples to the ears. In more severe cases, blackheads also may appear in other places, especially over the cheek bone area, other facial areas, behind the ears, and along the arms. Severe chloracne may lead to open sores and permanent scars.

Skin may become thicker and flake or peel. The condition fades slowly after exposure. Minor cases may disappear altogether, but more severe cases may persist for years after the exposure.

Veterans with chloracne (or other similar acneform disease) that appeared within one year of exposure to herbicides during service to a degree of at least 10 percent disabling by VA's rating regulations may be eligible for disability compensation and health care.

Veterans who served in Vietnam, the Korean demilitarized zone or another area where Agent Orange was sprayed may be eligible for a free Agent Orange registry health exam.

Surviving spouses, dependent children and dependent parents may be eligible for survivors' benefits if the deceased Veteran was exposed to herbicides and died as the result of chloracne (or other similar acneform disease).

Research on chloracne and herbicides

The Health and Medicine Division (formally known as the Institute of Medicine) of the National Academy of Sciences, Engineering, and Medicine concluded in its 1994 report on "Veterans and Agent Orange: Health Effects of Herbicides Used in Vietnam", as well as in its 2014 update and previous updates, that there is a positive association between chloracne and exposure to dioxin in Agent Orange.