First deployed on a large scale during the Gulf War, the U.S. military uses depleted uranium (DU) for tank armor and some bullets due to its high density, helping it to penetrate enemy armored vehicles. DU is a byproduct of the Uranium (U) enrichment process where the ratio of natural U isotopes from the earth’s crust is ‘enriched’ with higher energy U isotopes to produce U suitable for use in nuclear reactors. The U remaining is "depleted" of about 40 percent of its radioactivity, but retains the same chemical toxicity as natural uranium. If you think you were exposed to depleted uranium during your service, talk to your local VA Environmental Health Coordinator. Ask to be screened for depleted uranium exposure.

How Veterans may have been exposed 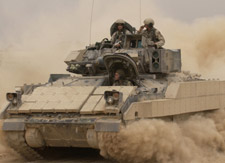 Some Gulf War, Bosnia, Operation Enduring Freedom (OEF), Operation Iraqi Freedom (OIF), and Operation New Dawn (OND) Veterans may have been exposed to DU when they were: on, in, or near vehicles hit with friendly fire; entering or near burning vehicles; near fires involving DU munitions; or salvaging damaged vehicles.

When a projectile made with DU penetrates a vehicle, small particles of DU can be formed and breathed in or swallowed by service members in the struck vehicle. Small DU fragments can also scatter and become embedded in muscle and soft tissue.

DU is a potential health hazard if it enters the body, such as through embedded fragments, contaminated wounds, and inhalation or ingestion. This is because U’s radiation, while of high energy, penetrates poorly through tissues in the body. Simply riding in a vehicle with DU weapons or DU shielding will not expose a service member to significant amounts of DU or external radiation.

The potential for health effects from internal exposure is related to the amount of DU that enters a person’s body. Inhaled DU particles are likely cleared from the lungs over several years. DU fragments may remain for many years. Older studies in U manufacturing workers show high exposures to U may especially affect the kidneys.

To date, in a group of Veterans exposed to DU in friendly fire events, there has been no health impact to the kidney noted, however, recent research shows there may be an association between elevated urine uranium in these Veterans and lower bone mineral density (BMD). The BMD results require further study to determine if they persist over time and researchers and clinicians continue to monitor the health of these Veterans.

Veterans may file a claim for disability compensation for health problems they believe are related to exposure to depleted uranium during service. VA decides these claims on a case-by-case basis. File a claim online.

When a vehicle is hit and penetrated by a DU projectile, it splits into small shards and bursts into flames. The projectile fragmentation may fill the vehicle with flying metal fragments, particles, and dust.

Get a Registry Evaluation

Contact your local https://www.publichealth.va.gov/exposures/coordinators.asp, https://www.oefoif.va.gov/map.asp, or VA Primary Care Team about getting a registry evaluation.

For evaluation for difficult-to-diagnose conditions, contact your local https://www.warrelatedillness.va.gov/WARRELATEDILLNESS/referral/index.asp.

VA presumes amyotrophic lateral sclerosis (ALS) diagnosed in all Veterans who had 90 days or more continuous active military service is related to their service.

When no presumed service connection has been established by law, Veterans may file a claim for disability compensation for health problems they believe are related to their exposures during military service. VA decides these claims on a case-by-case basis.

Gulf War Veterans with the following presumptive illnesses do not need to prove a connection with their military service in the Southwest Asia theater of military operations if they appear by December 31, 2016 and are at least 10 percent disabling. They may be eligible for disability compensation if they have a service-connected condition and were discharged under other than dishonorable conditions. These conditions include:

*These conditions are not necessarily associated with any specific exposure, but have been determined to be associated with service in Southwest Asia. The policy also provides compensation for certain infectious diseases.

Certain Veterans may be afforded enhanced eligibility status when applying and enrolling in the VA health care system. Veterans who:

When a Veteran of any period of service receives a valid diagnosis of posttraumatic stress disorder (PTSD), service connection may be granted if the illness is associated with an in-service stressful event.

"Depleted Uranium Follow-Up Program screens and monitors Veterans for health problems associated with exposure to depleted uranium (DU). The program is especially geared to Veterans who were on, in or near vehicles hit with 'friendly fire'; rescuers entering burning vehicles, and those near burning vehicles; salvaging damaged vehicles; or near fires involving DU munitions. VA requires active duty service in any of the conflicts listed below to qualify for the DU Follow-Up Program: