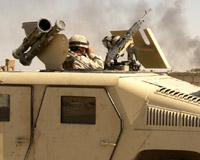 Inhaling CARC during the painting and drying process can be harmful. Dry CARC poses no hazards, except during welding or sanding.

How Veterans may have been exposed to CARC paint

Gulf War Veterans who painted combat vehicles and equipment during their military service may have been exposed to CARC paint or fumes without adequate respiratory protection.

Learn more about exposure to CARC paint from the Army Public Health Center.

Paint fumes present the most potential risk to users especially when CARC is spray painted, rather than applied with a brush or roller.

CARC paint contains several chemical compounds that can be hazardous when inhaled or exposed to the skin:

If you are concerned about health problems associated with exposure to CARC paint during your military service, talk to your health care provider or contact your local VA Environmental Health Coordinator to help you get more information from a health care provider.

Veterans may file a claim for disability compensation for health problems they believe are related to exposure to CARC paint during military service. VA decides these claims on a case-by-case basis. File a claim online.