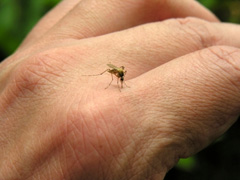 Military members may be at risk for malaria during deployment or personal travel to tropical and subtropical areas where the mosquito-borne disease is prevalent.

If you have returned from a malaria-affected country and develop a fever or flu-like symptoms, immediately seek medical care from your health care provider. Malaria is a serious and sometimes fatal disease, but it is curable if diagnosed and treated promptly.

Veterans who meet the criteria below do not have to prove a connection between their malaria and military service to be eligible to receive VA disability compensation:

You may file a claim for disability compensation online.

Malaria symptoms occur in cycles. Symptoms include fever, chills, drenching sweats, sudden coldness, flu-like illness, headache, nausea, and vomiting. The time period between the infection and development of malaria symptoms generally varies from 7 to 30 days. One strain has an incubation period of 8 to 10 months. With infection from some malaria species, relapses can occur months to years later.

To learn more about malaria, go to the Centers for Disease Control and Prevention (CDC) or to Medline Plus.

Drug prevention measures are not totally protective and must be combined with the use insect repellent, insecticide-treated bed netting, and protective clothing.

Doxycycline is now the drug of choice to prevent malaria in the deployed U.S. military. Mefloquine (Lariam®) is not recommended as a primary choice, but can be used by those who cannot take either doxycycline or atovaquone-proguanil (Malarone®).

How Veterans may get infected

Malaria is an infectious disease transmitted to human hosts by infected mosquitoes. Veterans may have contracted malaria while deployed to certain parts of Asia, Africa, and Central and South America.

Clinicians should consider the diagnosis of malaria for Veterans who have served in Korea, Operation Enduring Freedom (Afghanistan/Horn of Africa and surrounding countries), Operation Iraqi Freedom, Operation New Dawn, training and development missions in sub-Sahara Africa, or any other malaria-affected areas.

Malaria may also be transmitted through a blood transfusion from an infected person or by use of a contaminated needle or syringe.

Learn more about other VA benefits.