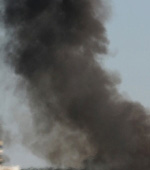 A fire that ignited in June 2003 at the Mishraq State Sulfur Mine Plant near Mosul, Iraq burned for almost a month. Field samples of air in the vicinity of the fire detected sulfur dioxide at levels immediately dangerous to health and life. Hydrogen sulfide also was released. Exposure varied by wind and fire conditions over time.

A group of soldiers from Fort Campbell, KY who were stationed in Iraq, most of whom had prolonged exposure to sulfur dioxide during the Mishraq Sulfur Mine fire, were evaluated for pulmonary symptoms in 2007. Many of these Servicemembers reported a significant change in their ability to run two miles on the Army Physical Fitness Test.

Both sulfur dioxide and hydrogen sulfide are gases that can produce irritation and reddening of the nose and throat, eye irritation, and coughing. At high levels, these gases can burn the skin and cause severe airway obstruction, hypoxia (inadequate supply of oxygen to the body) and pulmonary edema (fluid accumulation in the lungs).

Short-term high-level exposure has been associated with a rare condition of lung damage known as constrictive bronchiolitis and an asthma-like condition known as reactive airway dysfunction syndrome.

Veterans may file a claim for disability compensation for health problems they believe are related to exposures during the Mishraq Sulfur Mine fire. VA decides these claims on a case-by-case basis. File a claim online.