Perfluoroalkyl and polyfluoroalkyl substances (PFAS) are synthetic chemicals found in many products, such as clothing, carpets, fabrics for furniture, adhesives, paper packaging for food, and heat-resistant/non-stick cookware. They are also present in fire-fighting foams (or aqueous film forming foam; AFFF) used by both civilian and military firefighters. They are persistent (i.e., they do not break down) in the environment, and since they are used in the manufacturing of so many products, they are widespread internationally.

VA does not recommend blood tests to determine levels of PFAS in any individual. This is because most people in the U.S. have measurable amounts of PFAS in their blood and normal ranges have not been established. Also, blood tests cannot be linked to current or future health conditions or guide medical treatment decisions.

Exposure to PFAS During Military Service

In the 1970s, the Department of Defense began using AFFF to fight fuel fires. The release of these chemicals into the environment during training and emergency responses is a major source of PFAS contamination of ground water on military bases. 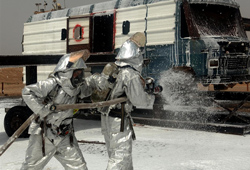 Concerns have recently been raised from communities surrounding bases about whether PFAS-contaminated ground water on military bases may be affecting off-base water supplies. The Department of Defense (DoD) is currently conducting an investigation into the extent of PFAS contamination on its bases and is taking several actions to protect against future exposure.

Exposure to PFAS in Drinking Water

The Environmental Protection Agency (EPA) is charged with establishing regulations for the presence of potentially harmful substances in air and drinking water in the US. PFAS are not currently regulated by EPA; however, EPA has several activities underway to learn more about the toxicity of PFAS, designate the family as hazardous substances to initiate clean up, and create drinking water standards where indicated. VA is closely monitoring these activities. Read more about EPA’s efforts.

Health problems that may be associated with PFAS

PFAS can be found throughout the world and most people have been exposed at low levels. According to the EPA, PFAS can be detected in the blood of most people. The likelihood of health problems from PFAS depends on several factors, including the concentration, frequency, and duration of exposure.  More research is needed to understand the link between exposure to PFAS and health effects in humans.

According to the Agency for Toxic Substances and Disease Registry (ASTDR), some studies in humans suggest that certain PFAS may be associated with:

Although some studies have reported these possible health outcomes, the overall scientific and medical evidence is currently inconclusive.

In addition to reviewing the potential health effects of PFAS, ATSDR is also involved in several communities with documented PFAS contamination. They conduct exposure assessments and provide technical assistance to local officials to help inform the members of these communities about their potential exposure to PFAS through drinking water. VA is closely monitoring these efforts.

The National Institute of Environmental Health Sciences and the National Toxicology Program (NIEHS/NTP; divisions of the National Institutes of Health) are supporting research to better understand the potential health effects of exposure to PFAS. Currently, NIEHS/NTP are conducting toxicity studies on PFAS (primarily in animal models) and funding other studies that investigate health effects in humans, as well as methods for reducing the potential for exposure to PFAS in the environment. VA is closely monitoring these efforts. Read more about NIEHS/NTP’s efforts.

If you are concerned about health problems associated with exposure to PFAS during your military service, talk to your health care provider or local VA Environmental Health Coordinator.

Veterans may file a claim for disability compensation for health problems they believe are related to exposure to chemicals during military service. VA decides these claims on a case-by-case basis. File a claim online.