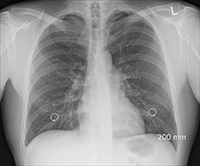 ACC Veterans are an important group to study because these Veterans handled or sprayed tactical herbicides during the Vietnam War and likely had one of the highest levels of herbicide exposure among those who served during that time. For the 468 ACC Veterans in this analysis, researchers reviewed physical examination, medical record, and health survey data from a large study of these Veterans conducted in 2013. Read about this study. As a part of the physical examination, researchers used a spirometer to measure breathing and airflow out of the lungs. Spirometry is just one of a group of objective tests that doctors can use to test how well a person’s lungs work. Herbicide exposure was based on whether a Veteran reported being exposed to herbicides.