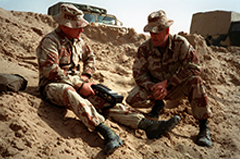 A Marine Corps journalist, left, interviews a
gunnery sergeant at a camp in northern
Saudi Arabia during Operation Desert Storm.

On January 17, 1991, Operation Desert Storm and the air war began with an illuminated night sky over Baghdad. Breaking news coverage of the event mesmerized U.S. audiences and offered many their first vivid connection to what it meant to be a military Servicemember. A timeline showing the major events of the United States’ involvement in the United Nations’ action to liberate the nation of Kuwait from occupying Iraqi forces can be found at www.gulflink.osd.mil/timeline/index.html.

The Gulf War is often remembered for its dramatic, successful air strikes, the short duration of the ground war, and the relatively low number of U.S. casualties. To mark the 25th anniversary, we want to remember and honor those who served by sharing reflections on the war from VA employees—many of whom are also Gulf War Veterans. 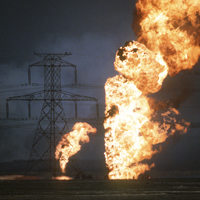 Oil well fires blaze out of control outside
Kuwait City. The wells were set afire by
Iraqi forces prior to their withdrawal from
the region during Operation Desert Storm.

Carol Sobel: "During Desert Shield, I was a newly-promoted Master Sergeant assigned to the Defense Information School at Fort Benjamin Harrison, Ind. I was slated to be assigned to fill the NCOIC position in the Public Affairs Office, 2nd Armored Division (Forward), Garlstedt Germany in January 1991. That was, until the unit was called up to deploy in November, giving me only ten days to get to Germany, leaving my family behind. We were in theater in January, writing articles and taking photographs of the preparations the unit was making for combat during the Shield portion, and then, during Storm combat operations where we were part of the famous 'left hook.' At the end of the 100-hour war, we were in Kuwait, straddling the highway leading to Iraq, watching the sky turn black from the burning oil wells. We lost eight soldiers, some to friendly fire, which still affects me to this day. I am part of a Facebook group for Desert Storm Veterans, to keep in touch, give cheer, tell stories, give condolences if someone gets sick, or dies, and, in my case, as a VA employee, help provide information needed to get some the VA care they need."

Ken Mac Garrigle: "I was in the U.S. Army Reserves. We were on an exercise at Fort Bragg, N.C., with the 82nd Airborne Division. During the exercise, I happened to see a local Fayetteville newspaper with the large headline, 'Iraqi Tanks Invade Kuwait.' I thought, 'Hey, that's weird, that's just like our scenario here…wait a second.' It was spooky. The next day, an active duty lieutenant requested that we Reservists stop the exercise and go to the Fort Bragg post library to try and get the names/addresses of hardware stores, building supply stores, etc., in Saudi Arabia for his unit. He knew that they would need supplies in country that they could not take with them. And yes, I said library, remember this was before the Internet, Google, the online CIA Fact Book. Our lieutenant had, no doubt, been given a warning order, and soon enough, we would be heading off to the Pope AFB Green Ramp to be part of the designated 82nd Airborne 'speed bump' in the Saudi Arabian desert for Operation Desert Shield/Storm. A month later, my Reserve unit was told we would be joining the buildup, as well."

Mr. Mac Garrigle is a retired U.S. Army Reserve Major who deployed to Operation Desert Storm, Bosnia, and Operation Iraqi Freedom. He is a social media, Web, and outreach manager for the Veterans Health Administration.

Debbie Gramlick: "Early in Desert Shield, I was deployed as an Air Force Public Affairs Specialist to a tiny British-owned island in the middle of nowhere called Diego Garcia. On night one of Desert Storm, we stood on top of our tents to count the number of B-52s returning to the island, to make sure everyone made it home alive. Many of us rushed to base ops that night to greet our aircrews, but one of the pilots—a young captain—looked as pale as a ghost, and didn’t utter a word. I caught up with the young pilot the next day and he opened up about flying low-level over Iraq, watching Triple-A explode all around him, and the prospect of his mother reading in the news that her only son had died on the first night of Desert Storm. He continued to share his experiences with me after each combat mission until the war ended, and we returned home to our respective bases, promising to keep in touch. This February, we will celebrate our 24th wedding anniversary."

Ms. Gramlick is the Executive Assistant to the Assistant Deputy Under Secretary for Health, Administrative Operations within the Veterans Health Administration.

A U.S. Air Force B-52G Stratofortress aircraft takes off on a mission in support of Operation Desert Storm. The aircraft is armed with bombs on the wing pylons.

Ralph L. Erickson: "On August 1, 1990, as a young Army doctor, fresh from completing my residency training at Walter Reed, I reported in at Fort Bragg, North Carolina for my new assignment at U.S. Army Special Operations Command (USASOC). The following day, Iraqi forces invaded Kuwait and we were all put on alert for deployment. I remember the next nine months being incredibly busy ones as I helped prepare our special ops units before they deployed and then, later joined them in theater. Because of my preventive medicine and public health training, I was also called upon to work in northern Iraq and southeast Turkey after the war in the EUCOM/NATO relief effort for displaced Iraqi Kurds (Operation Provide Comfort). There’s no question that these early experiences significantly shaped what would become a 32-year Army career."

Dr. Erickson is a retired Army Veteran of the Gulf War (1990–1991) and Operation Iraqi Freedom (2003). He currently serves as the Chief Consultant for Post-Deployment Health Services within Patient Care Services at the Veterans Health Administration.

Gulf War at a glance

Gerard R. Cox: "I had just completed my emergency medicine residency and reported to the Naval Medical Center at Portsmouth, Virginia on August 1, 1990 as a brand new attending physician. Saddam Hussein invaded Kuwait the next day—and within three weeks I found myself with about 900 other personnel from Portsmouth in Al Jubail, Saudi Arabia, where we erected and manned a 500-bed Fleet Hospital, an untested concept for the U.S. Navy at the time.

Fleet Hospital Five was one of the first medical units deployed to the region as part of what would become known as Operation Desert Shield, then later Desert Storm. I worked in the Casualty Receiving department, where we trained incessantly to care for combat trauma victims and mass casualty situations. Because we were in place for almost 5 months before the air war started in January 1991, and because the hospital was located at an industrial port that served as the entry point for hundreds of other units entering the theater, Fleet Hospital Five also served as the community hospital and source of medical support for tens of thousands of troops from other U.S. service branches as well as British and other allied nations.

When the ground war began in February, I was forward deployed to another field medical unit in the desert to treat casualties as they were evacuated from the front lines. Thankfully, Desert Storm was brief and produced relatively few casualties. Within a few weeks of the end of hostilities, I returned home after a 7-month deployment, many pounds lighter and much more experienced in military operations. I will never forget the experiences of that first deployment, from sharing a tent with nine other men to jumping into the above-ground sandbag bunkers that we’d built with our own hands whenever SCUD missile warnings sounded in the middle of the night."

Dr. Cox serves as Interim Director of the Office of Medical Inspector. Prior to joining the Department of Veterans Affairs, he served as a U.S. Navy medical officer for more than 30 years.

Dore Mobley: "I was a sophomore in college during the Gulf War. I and about 10 other students sat day after day in the dorm lounge between classes transfixed by the media's play-by-play of the start of the war. The success of the air strikes filled me with pride and affected me in ways I wouldn't acknowledge fully until years later. In 2007, I was asked in an interview, 'Why do you want to work for VA?' In response, I recounted the awe I felt watching the Gulf War and my respect for the Servicemembers protecting U.S. interests. Working for VA, was my opportunity to be of service to Veterans and to say thanks."

Ms. Mobley is a Communications Specialist with Patient Care Services within the Veterans Health Administration. She is also the daughter and granddaughter of Navy Veterans and sister to two Army Veterans.

These stories remind us of the friendships forged, families made, and the careers launched during the Gulf War for which we are grateful. To all the Gulf War Veterans, we say, "Thanks. We remember. You made us proud."