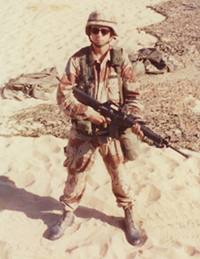 Gulf War Veteran William “Bill” Watts, Sr., earned numerous awards during his tours of duty, which included tours in Egypt and Korea along with service as a Gulf War combat Veteran, but the reward he values the most today is the one he receives as an advocate helping his fellow Gulf War Veterans with their individual challenges.

“I am in favor of Veterans helping Veterans. Quality of life begins with quality of health care,” said Watts, whose work with Veterans has earned him the Congressional Veterans Commendation Award. His work includes volunteering with Veterans in his community and meeting with researchers and health professionals to make sure that the health concerns of Gulf War Veterans are recognized and addressed. 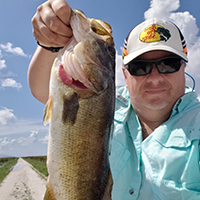 One of Mr. Watts’ passions is helping Gulf War Veterans manage their health problems by finding non-drug alternatives. As a resident of the South Florida city of Doral, he volunteers with the non-profit Fishing with America’s Finest and also serves as the group’s first director of operations. Fishing with America’s Finest takes combat Veterans bass fishing in the Florida Everglades to help reduce the stress and anxiety from PTSD. “We try to teach them to the point that they can go on fishing tounaments if they want to,” he said. He is also a team member of Dive4Vets, a group that takes Veterans who suffer from physical and mental health issues scuba diving to help them heal.

As a Gulf War Veteran, Watts is eligible for the Gulf War Registry and Airborne Hazards and Open Burn Pit Registry, and enrolled many years ago. “Participating in the registries were pretty easy from what I remember,” he said.

Watts understands that some Gulf War Veterans are older and may not be comfortable with completing an online-only registry like the Airborne Hazards and Open Burn Pit Registry. A local Environmental Health Coordinator can help with this process.

Watts also has to deal with his own health issues related to Gulf War service. Being as active as possible helps him with his symptoms, along with medications. “You have to be active or it will drive you crazy and bring you down even more,” he said.