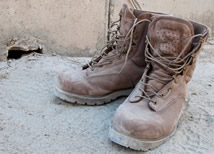 During the spring and summer of 2003, about 830 Servicemembers guarded a water treatment facility in the Basrah oil fields at Qarmat Ali, Iraq. Servicemembers included National Guard, Reserve, and active duty soldiers. Many of the Guard/Reserve members were from Indiana, South Carolina, West Virginia, and Oregon.

This facility was contaminated with sodium dichromate dust, which is a source of hexavalent chromium, a chemical that is known to cause cancer.

VA has set up a free, special medical surveillance program to monitor the health of Veterans who were at Qarmat Ali. Contact your local OEF/OIF/OND Program Manager to make an appointment to enroll in the program.

Exposure to chromium at Qarmat Ali

The Qarmat Ali Water Treatment Facility area was contaminated with sodium dichromate. The chemical was used as an anti-corrosion agent by previous workers at the plant and was found on the ground after bags of the chemical were opened at the site. Those Servicemembers assigned to the Qarmat Ali Water Treatment Facility may have been exposed to toxic hexavalent chromium from breathing contaminated sodium dichromate dust.

The water at Qarmat Ali was not used for drinking, so drinking contaminated water is not considered a significant source of exposure.

Service members who worked in the port at Qarmat Ali or those who simply drove supplies back and forth to the site were at no risk for exposure.

In September 2003, the water treatment plant site grounds were cleaned and covered with asphalt. In October 2003, the U.S. Army assessed the environmental contamination levels and evaluated most of the Servicemembers present at that time. The results indicated low risks for health-related problems for these Servicemembers. However, the amount of exposure of those Servicemembers present before the U.S. Army’s assessment is uncertain. Therefore, it is difficult to determine an individual’s level of risk.

Health effects of exposure to chromium

Prolonged exposure to breathing high concentrations of chromium over months or years is known to cause lung cancer when the levels in the air are many times higher than those found in the natural environment. Exposure to chromium for short periods usually does not cause cancer.

Symptoms: Exposure to chromium can cause nasal irritations such as runny or itchy nose, sneezing, nosebleeds, nasal ulcers and holes in the nasal septum. It also can cause respiratory problems like asthma, skin irritation, and skin ulcers.

The Environmental Protection Agency determined chromium in the air is a human carcinogen. There is not enough information available to link chromium in food or water the same way.

VA has developed a medical surveillance program for Veterans who many have been exposed to hexavalent chromium at the Qarmat Ali Treatment Facility in Iraq. The program is provided free of any charge or copay.

While VA does not expect to find many serious Qarmat Ali-related illnesses, it is important to monitor the health of those who may have been exposed.

Veterans who enroll in the program will receive an exam:

If any abnormalities are found, the Veteran will be referred to the proper specialty service.

Whether you have symptoms or not or are already part of the VA Gulf War Registry, VA encourages you to participate in this free program.

Veterans may file a claim for disability compensation for health problems they believe are related to exposure to chromium at the Qarmat Ali Water Treatment Facility. VA decides these claims on a case-by-case basis. File a claim online.