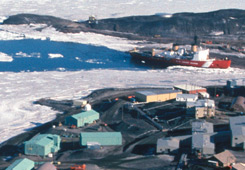 As a part of Operation Deep Freeze, the U.S. Navy operated a small nuclear power plant at the McMurdo Station, Antarctica, from 1962 to 1979.

The nuclear plant was decommissioned after a leak was discovered.

The estimated radiation doses for Veterans at McMurdo Station are low. The risk of diseases from this exposure are also low. Read the dose assessment reports from the Department of Defense to learn more:

Although the risk of disease is low, VA recognizes certain cancers and other diseases as linked to exposure to ionizing radiation during service. Eligibility for VA compensation depends on a number of factors, such as the radiation dose and when the disease develops.

If you are concerned about radiation exposure during service, talk to your health care provider or local VA Environmental Health Coordinator.