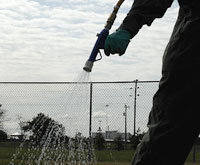 VA evaluated pesticide exposure as a possible cause of Gulf War Veterans' chronic multisymptom illnesses and concluded that research does not support an association currently. Read VA's rationale in the Federal Register notice.

VA continues to study the health of Gulf War Veterans.

Pesticides used in the Gulf War

Lindane and DEET were used as personal insect repellents, lindane to treat uniforms and DEET on the skin. All other pesticides shipped to the Gulf region were to be used only by specially trained individuals or for specific applications.

Visit the Deployment Health and Family Readiness Library to learn how DEET and permethrin-impregnated clothing are used during service.

Gulf War Veterans may be eligible for a variety of VA benefits, including: