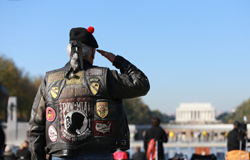 Post-traumatic stress disorder (PTSD) is defined as having flashbacks, upsetting memories, and anxiety following a traumatic event. It was first officially recognized as a mental health condition in 1980, only five years after the end of the Vietnam War. For hundreds of years, these symptoms have been described under different names in soldiers from many wars. However, Vietnam Veterans with these symptoms were the first to have the term ‘PTSD’ applied to them. Despite the passage of 50 years since the war, for some Vietnam Veterans, PTSD remains a chronic reality of everyday life.

In 1983, Congress requested that VA conduct a study on the prevalence of PTSD and other postwar psychological problems among Vietnam Veterans. This was the first study to evaluate the prevalence of PTSD among Veterans, and became known as the National Vietnam Veterans Readjustment Study (NVVRS). The NVVRS brought greater attention to the issue of PTSD as it found that as many as 15 percent of Veterans had PTSD.

More recently, Congress requested that VA conduct a follow-up study among the participants of the NVVRS, known as the National Vietnam Veterans Longitudinal Study (NVVLS). The NVVLS was completed in December 2013, and was the first study to measure the long-term health and mental health of Vietnam Veterans.

Both the NVVRS and NVVLS compared two groups of Veterans: those deployed to the Vietnam War (“theater Veterans”), and those who served during the Vietnam-era, but were not deployed to the Vietnam theater (“era Veterans”). The NVVLS assessment of the Veterans’ physical and mental health included a self-report survey, a phone interview, and for some randomly selected participants, an additional phone interview led by a mental health clinician that focused on issues including PTSD, depression, and substance abuse.

While NVVLS findings confirm that the majority of Vietnam theater Veterans are both mentally and physically healthy, a significant number are still suffering from PTSD symptoms and other chronic health issues related to their service.

VA is using the results of this study and other similar studies to better understand the long-term effects of military service. The results will allow VA to improve care and to better address Veterans’ long-term health needs, as well as anticipate future health needs of recent Veterans.

For more information on VA research related to the health of Vietnam Veterans, visit www.publichealth.va.gov/exposures/agentorange/research-studies.asp. 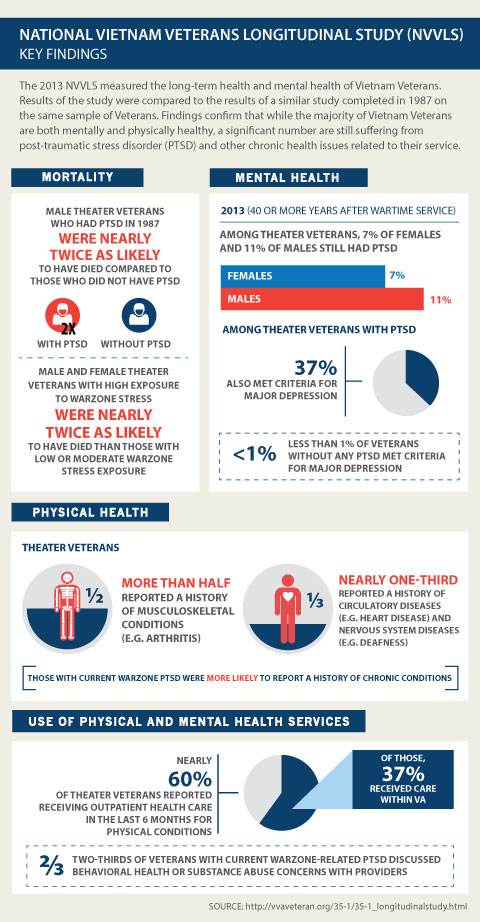 The 2013 NVVLS measured the long-term health and mental health of Vietnam Veterans. Results of the study were compared to the results of a similar study completed in 1987 on the same sample of Veterans. Findings confirm that while the majority of Vietnam Veterans are both mentally and physically healthy, a significant number are still suffering from post-traumatic stress disorder (PTSD) and other chronic health issues related to their service.

Male theater Veterans who had PTSD in 1987 were nearly twice as likely to have died compared to those who did not have PTSD.

Male and female theater Veterans with high exposure to warzone stress were nearly twice as likely to have died than those with low or moderate warzone stress exposure.

Among Theater Veterans, 7% of females and 11% of males still had PTSD.

Less than 1% of Veterans without any PTSD met criteria for major depression.

More than half reported a history of musculoskeletal conditions (e.g. arthritis).

Those with current warzone PTSD were more likely to report a history of chronic conditions.

Use of Physical and Mental Health Services

Nearly 60% of theater Veterans reported receiving outpatient health care in the last 6 months for physical conditions. Of those, 37% received care within VA.