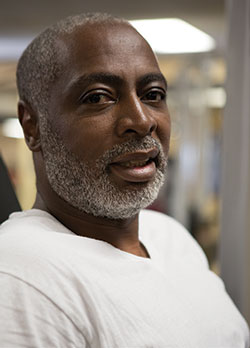 VA presumes that some health conditions were caused by military service. In practical terms, Gulf War Veterans who meet certain criteria do not have to prove an association between their illness and military service. By assuming a link between symptoms and military service, VA simplifies and speeds up the application process for health care and disability compensation benefits. Presumptive illnesses are listed in the graphic below.

For Gulf War Veterans, VA presumes that unexplained symptoms are related to Gulf War service if a Veteran has experienced them for six months or more. The “presumptive” illness(es) must have first appeared during active duty in the Southwest Asia theater of military operations or by December 31, 2016, and be at least 10 percent disabling. 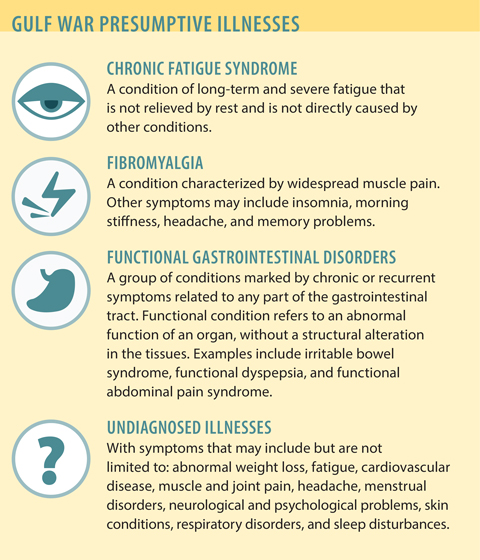 Chronic Fatigue Syndrome: A condition of long-term and severe fatigue that is not relieved by rest and is not directly caused by other conditions.

Fibromyalgia: A condition characterized by widespread muscle pain. Other symptoms may include insomnia, morning stiffness, headache, and memory problems.

Functional Gastrointestinal Disorders: A group of conditions marked by chronic or recurrent symptoms related to any part of the gastrointestinal tract. Functional condition refers to an abnormal function of an organ, without a structural alteration in the tissues. Examples include irritable bowel syndrome, functional dyspepsia, and functional abdominal pain syndrome.

Undiagnosed Illnesses: With symptoms that may include but are not limited to: abnormal weight loss, fatigue, cardiovascular disease, muscle and joint pain, headache, menstrual disorders, neurological and psychological problems, skin conditions, respiratory disorders, and sleep disturbances.

Chronic multi-symptom illness (CMI) describes the presence of symptoms in two or more body systems that last or recur regularly for more than six months. This term was first used in 1998 in the article describing the symptoms of Gulf War Veterans and its use and meaning has evolved over the years. According to the Institute of Medicine, CMI was a general term that applies to a diverse mix of conditions. Some examples of CMI include:

If you suffer from CMI, consider reaching out to VA to get help. VA is actively strengthening its support of Veterans with CMI through enhanced recognition, education, and monitoring of their needs. Through an improved system of care and a well-prepared workforce, Veterans with CMI will find the clinical care and additional benefits they need to optimize their health and quality of life.