Members of VA’s Research Advisory Committee on Gulf War Veterans’ Illnesses have expressed concerns about the possible association between exposure to chemical nerve agents and the occurrence of brain cancers in Gulf War Veterans. 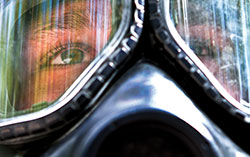 To address these concerns, VA announced that a new work group of VA subject matter experts would review the incidence of brain cancer in Gulf War Veterans. The work group is expected to present Secretary Robert A. McDonald with its findings in spring 2015.

The work group is studying Gulf War Veterans who may have been exposed to chemical weapon agents during the demolition of an ammunitions depot in Khamisiyah, Iraq. This event took place in March 1991 after the Gulf War cease-fire.

“VA recognizes and respects the service, dedication and many challenges faced by Veterans of the 1990-1991 Gulf War, and is committed to improving the health and well-being of these Veterans,” said VA Secretary McDonald. “We are forming this work group to conduct a thorough review of all available documentation to help us determine if there could be a correlation between brain cancers and possible exposure to chemical weapon agents.”

More information on health effects of Gulf War exposures can be found at www.publichealth.va.gov/exposures/gulfwar/sources/chem-bio-weapons.asp.