Research roundup: The latest research on the health of Gulf War Vets 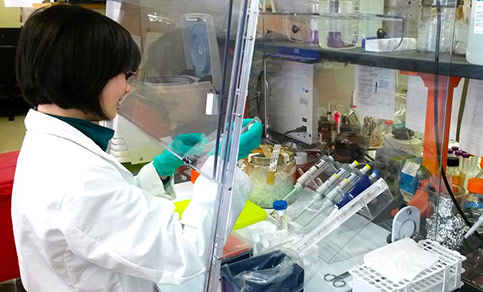 Yang Chen, PhD extracts DNA for analysis in a WRIISC study to see whether mitochondria are damaged and/or not properly functioning in Veterans with Gulf War illness.

VA researchers across the country are conducting studies on the health of Gulf War Veterans. Some studies are just beginning and researchers are looking for volunteers.

Timothy Connors, who served in the Persian Gulf twice between 1986 and 1991, participated in a study on Gulf War illness at the War Related Illness and Injury Study Center (WRIISC) in East Orange, New Jersey. Connors said he saw six primary providers at VA in five years for his health problems, and he was frustrated with his VA experience. “I was getting nowhere with VA. I was on 35 to 40 medications,” said Connors. As a part of the study, the researchers reviewed his health and the medications he took. They created a treatment plan for him and shared it with his providers. “It was helpful,” said Connors. “I am down to five medications now.” Below is a sample of health studies on Gulf War Veterans that have just started or are currently underway. VA encourages Gulf War Veterans to make a difference in the health and well-being of fellow Veterans, and hopefully their own health, by participating in a research study.

CoQ10 in Gulf War Illness: VA researchers want to know if the antioxidant Coenzyme Q10 (CoQ10) will treat Gulf War illness. In a pilot study, researchers found that CoQ10 improved physical function and symptoms in Veterans with Gulf War illness (learn more about the pilot at https://www.ncbi.nlm.nih.gov/pubmed/25149705). The current study builds on the pilot. This study is for Veterans with Gulf War illness and will be conducted at the VA Medical Centers in Miami, Boston, the Bronx, and Minneapolis. For more information about this study, go to https://clinicaltrials.gov/ct2/show/NCT02865460

Complementary and Alternative Medicine (CAM) for Sleep, Health Functioning, and Quality of Life in Veterans with Gulf War Veterans’ Illnesses: This is an ongoing clinical study at the WRIISC at the Washington DC VA Medical Center to find out if CAM approaches can improve Gulf War Veterans’ illnesses. Participants will be randomly assigned to one of two different consecutive eight-week groups: one group will receive health education classes that provide resources and promote wellness, and the other group will attend iRest yoga meditation and auricular (ear) acupuncture classes. In order to be eligible for the study, Gulf War Veterans must have been deployed between 1990-1991 and must have two out of three of the following symptoms: fatigue, pain, and/or self-reported cognitive difficulties. To learn more, contact the study team at 1-800-722-8340 or go to https://www.warrelatedillness.va.gov/warrelatedillness/research/volunteer/dc-wriisc.asp

Post-Exertional Malaise in Gulf War Illness: Brain, Autonomic and Behavioral Interactions: Researchers are using brain imaging and ultrasound techniques to examine different aspects of the nervous and immune systems, and how their functions are affected by exercise. This study is for Veterans who deployed to the Gulf War, and Veterans who served, but were not deployed, between 1989 and 1994. Participants will visit either the VA Medical Center in Madison, WI, or East Orange, NJ, for a total of three visits. Learn more by calling 1-800-248-8005, or visit https://www.warrelatedillness.va.gov/research/volunteer/nj-wriisc.asp#post-exertional-malaise 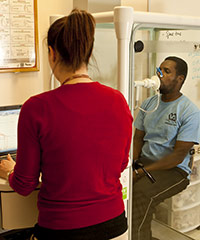 The WRIISC has many state-of-the-art
assessments for Veterans with airborne hazard
exposures. One of these methods is complete
pulmonary function testing (PFT) which includes
assessment of spirometry, lung volume, and
lung diffusing capacity.

Development of Dietary Polyphenol Preparations for Treating Veterans with Gulf War Illness: study is for Gulf War Veterans who have symptoms of Gulf War illness. Participants will enroll in a 24-week study to test the effectiveness of daily Concord grape juice consumption in improving fatigue and thinking ability. Participants will make regular bi-weekly visits to the VA Medical Center in East Orange, NJ, to fill out short surveys and restock on grape juice, in addition to three longer sessions occurring at the baseline, week 12, and week 24 of the study. For more information call 1-800-248-8005, or go to https://www.warrelatedillness.va.gov/research/volunteer/nj-wriisc.asp#grape-juice-study

WRIISC as a Model of Care for Chronic Multi-Symptom Illness: All three WRIISC sites are conducting a study to learn how health care providers and Gulf War Veterans think and talk about Gulf War illness. The goal is to better understand the factors that lead to better relationships between Veterans and their providers and how to improve outcomes of care. Researchers are recruiting Gulf War Veterans with Gulf War illness to participate at the WRIISCs within the Veterans Affairs Medical Centers in Palo Alto, CA; Washington, DC; and East Orange, NJ. Interested Veterans can call 1-800-248-8005 or visit https://www.warrelatedillness.va.gov/research/volunteer/nj-wriisc.asp#wriisc-model-cmi to learn more.

Gulf War Era Cohort and Biorepository (GWECB): Researchers have collected information and blood samples from more than 1,270 Veterans who served during the 1990-1991 Gulf War era. Now the team is making the information and the collected blood samples available to approved researchers who want to study and learn more about the health of Veterans of this era. Study researchers are also conducting group discussions and interviews with Veterans to learn more about what would motivate them to enroll in research projects, what concerns Veterans have, and how research projects can better meet Veterans’ needs. Researchers are currently enrolling Veterans from select areas for this study. To learn more, visit www.research.va.gov/programs/csp/585