At military sites in Iraq and Afghanistan, trash and human waste were often burned in open air pits known as "burn pits." Some Veterans have health problems they believe to be linked to exposure to burn pit smoke and other airborne hazards such as sand and dust storms, oil well fires, and air pollution.

According to VA's 2010 National Survey of Veterans, about one third of previously deployed Servicemembers report "definite or probable exposure to environmental hazards” during military service." 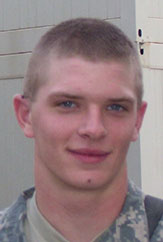 "Post-9/11 Vet" recently caught up with Indiana Army National Guard Staff Sgt. Chris Centers who participated in the Registry and shares his reasons.

What conflict did you serve in and what were your duties?

Chris: From 2006 to 2008, I served in Operation Iraqi Freedom as a combat engineer doing route clearance, route sanitation, and blast hole repairs.

What was your exposure to burn pits and airborne hazards?

Chris: We had a burn pit on LSA Anaconda where I lived. Also, as part of route sanitation, we pushed local dumps back from the road and sometimes the trash was on fire. In addition, there was smoke given off from explosions and other items that were burning when we did route clearance, such as oil spilled from tankers and local hospital debris. So, there were a lot more things burning than just burn pits.

Do you have any concerns about your exposure?

Chris: Yes, now I sniffle and have some problems breathing, particularly when I’m running. The sniffle is pretty much continuous, like a snuffle or cough, and sometimes I hack stuff up. I don't notice it much but the people around me notice it.

What do you hope to get out of participating in the Registry?

Chris: Hopefully we can get a lot more awareness. I know that a lot of other guys who served in different places had more exposure to burn pits and other scenarios than I did. So hopefully the registry can make people aware of the issues that exposure causes.

Are you recommending the Burn Pit Registry to fellow Vets?

Chris: Actually, I've already shared the registry website with a lot of the guys I know who have been over there, so I've been putting out the word. 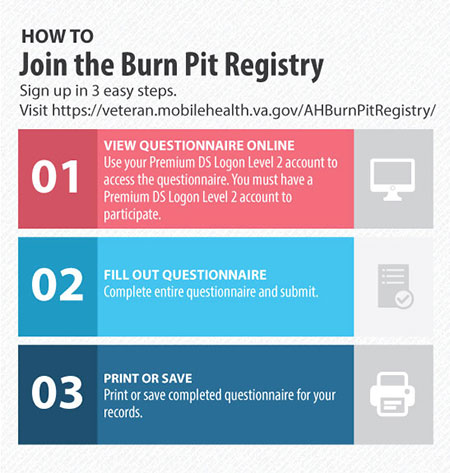 VA continues to study the health effects of exposure, and in June 2014 launched the "Airborne Hazards and Open Burn Pit Registry." The registry allows Veterans to document their exposures and report health concerns using a web-based questionnaire. Eligible Veterans include those who served in:

To participate in the registry, go to https://veteran.mobilehealth.va.gov/AHBurnPitRegistry. All eligible Veterans, including those with no current symptoms, are encouraged to register. Participants will receive updates about ongoing VA studies and treatments, and can get an optional, no-cost VA medical evaluation.