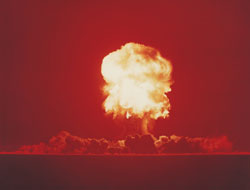 The following groups of Veterans participated in what is called a "radiation-risk activity."

"Atomic Veterans," an unofficial term that refers to Veterans who:

Veterans who participated in underground nuclear weapons testing at:

VA recognizes certain cancers and other diseases as linked to exposure to ionizing radiation during military service.

Veterans may be eligible for a free Ionizing Radiation Registry health exam to check for possible long-term health problems related to ionizing radiation exposure. You do not need to enroll in VA's health care system to take part.

VA can help determine exposure during military service after you file a claim for compensation benefits for health problems associated with radiation exposure during service.

Find out how VA confirms exposure.