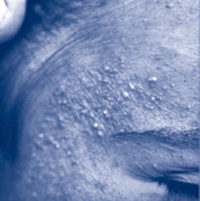 Two skin conditions, chloracne and porphyria cutanea tarda, may be related to exposure to Agent Orange during the Vietnam War. Below is information about these conditions, including possible causes and benefits available from VA. These conditions do not appear years later. They appear within a year of toxic exposure.

Chloracne is a rare skin condition consisting of blackheads, cysts, and nodules. It can look like teenage acne, and may be severe and painful; however, acne forms from overactive glands in the skin that produce and release oils. With chloracne, toxic chemicals concentrate in these glands, break down slowly, and change the skin glands into cysts. Chloracne usually clears up within two years. Severe chloracne can lead to open sores and permanent scars.

Causes: Chloracne is caused by certain types of toxic chemicals, including dioxin, a contaminant found in Agent Orange. The condition can develop a few months after swallowing, inhaling or touching the chemical. People can get chloracne from an occupational or environmental exposure, but not everyone exposed to a toxic chemical like dioxin will develop chloracne. Chloracne does not develop years later.

Porphyria cutanea tarda is a condition in which the skin thins and blisters on sun-exposed areas. Symptoms include blisters on the face, arms, and hands, followed by crusting and scarring, hyperpigmentation, increased hair growth on areas exposed to the sun, and liver damage.

Causes: Besides Agent Orange exposure, this skin condition can be caused by a combination of genes, lifestyle, and environmental factors. It can also run in families, although this is less common.

Veterans with either chloracne or porphyria cutanea tarda qualify for presumptive service connection for health care and disability benefits if:

Learn more about chloracne at: https://www.publichealth.va.gov/exposures/agentorange/conditions/chloracne.asp .