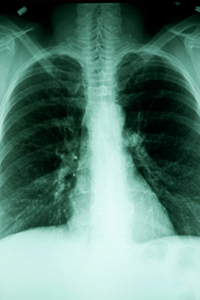 Researchers from the Airborne Hazards Center of Excellence at the New Jersey War Related Illness and Injury Study Center (WRIISC) help Veterans and VA to better understand the potential health effects of airborne hazards exposure. Recently, the team conducted a study on pulmonary (lung) function and lung diffusing capacity in deployed Iraq and Afghanistan Veterans.  Lung diffusing capacity is the lungs’ ability to let oxygen to diffuse to the blood, and the ability for carbon dioxide to diffuse from the blood to the lungs.

Researchers reviewed records from 143 Veterans referred to the WRIISC for post-deployment health concerns. All of these Veterans had pulmonary function tests. More than 75% of the Veterans had normal lung volumes and spirometry (breathing capacity) tests. However, researchers also found an isolated reduction in lung diffusing capacity in 30% of the patients. An isolated reduction in lung diffusing capacity may be associated with underlying pulmonary disease.

To read a summary of the research findings, go to https://www.ncbi.nlm.nih.gov/pubmed/27614096.  Veterans with concerns about their respiratory health should talk to their primary health care provider.